When a child is born to different-sex adults, we have legal ways to determine who the child’s parents are. Obviously, determining who is a child’s mother is easy, absent adoption or surrogacy she is the woman who gave birth to the child. In many cases determining a father is also easy as the law presumes that a married woman’s husband is the child’s father and if the woman is unmarried she can bring a paternity suit against a suspected “father.” In the wake of the Supreme Court’s landmark marriage equality ruling in Obergefell v. Hodges, these laws encountered a problem. Because of their gendered construction, how does the law determine who the legal parents of a child born to same-sex couples are? Following Obergefell, the Uniform Law Commission set out to answer these questions by revising the Uniform Parentage Act (UPA).

First passed in 1973, the Uniform Parentage Act seeks to create a uniform legal system for determining parent-child relationships. Prior to this year, the Act had been amended a few times, most recently in 2002. The 2017 UPA amendments create a paradigm that is constitutional in light of the Supreme Court’s decisions in Obergefell and in Pavan v. Smith earlier this year.

Among the most significant changes in the 2017 UPA is the inclusion of gender-neutral language such that the act applies equally to fathers and mothers. This is made abundantly clear in § 107 which states, “To the extent practicable, a provision of this [act] applicable to a father-child relationship applies to a mother-child relationship and a provision of this [act] applicable to a mother-child relationship applies to a father-child relationship.” Apart from this provision, many of the operative sections of the UPA are now also written gender neutral. Section 204 (which deals with the marital presumption of parentage) now refers to “an individual and the woman who gave birth to a child” rather than gendered terms like a “woman and her husband” in determining if a marital presumption applies. Similar gender-neutral language is applied throughout the revised UPA.

While these changes sound insignificant, their impact is anything but. In the wake of nationwide marriage equality, there have been a significant number of paternity and custody suits involving children of same-sex couples. Some of these cases, like McLaughlin v. Jones in Arizona, involved arguments based in large part on the gendered language in the statute. In McLaughlin, following the deterioration of her marriage with her partner, Kimberly, the birth mother of a male child, argued that her former partner had no parental rights over her child because the plain language of Arizona’s marital presumption statute referred to “paternity” and “males.” At the outset of their opinion, the Arizona Supreme Court stated that “a man is presumed to be a legal parent if his wife gives birth to a child during the marriage. We here consider whether this presumption applies to similarly situated women in same-sex marriages.” Based on Pavan and Obergefell, the Arizona court determined that the presumption applied equally to same-sex couples. 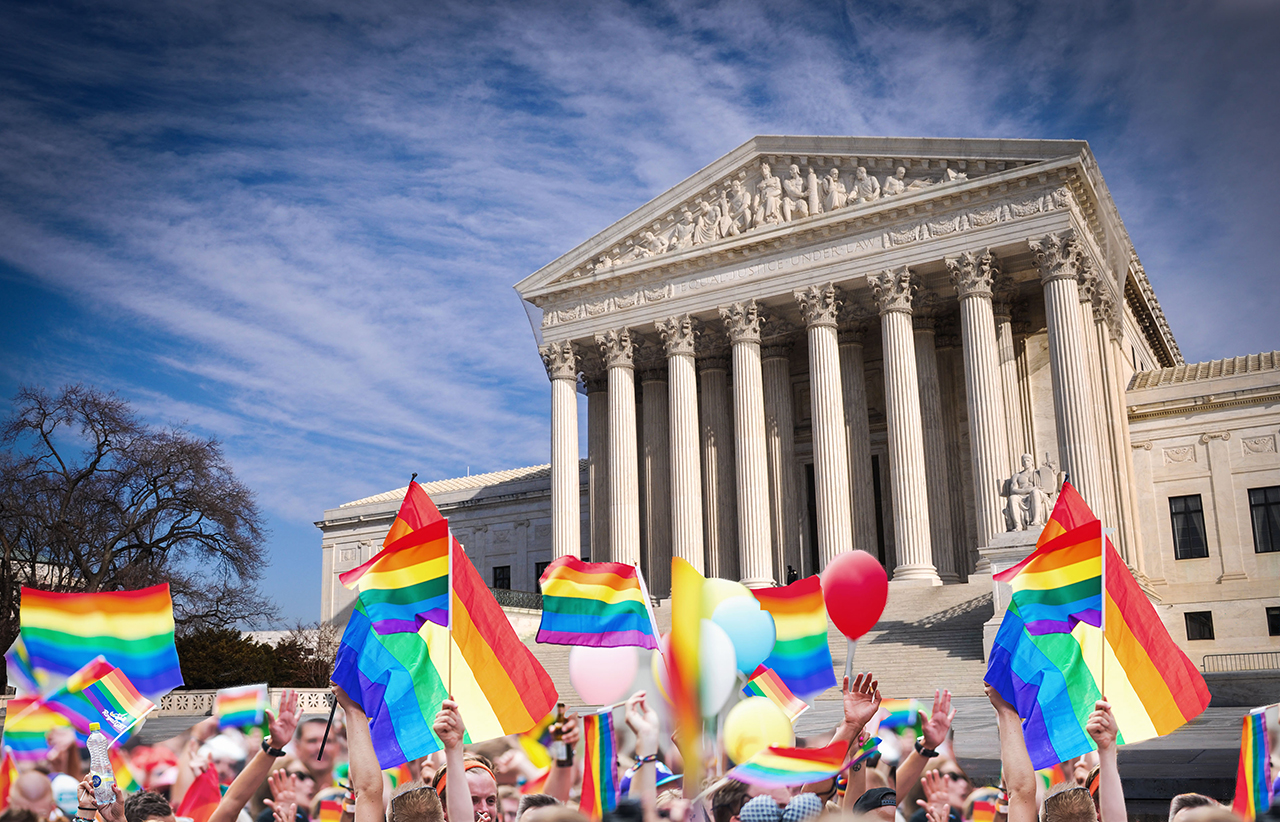 Celebrations outside the Supreme Court in Washington, D.C. after the decision of Obergefell v. Hodges. Courtesy of Church Militant.

The 2017 UPA has yet to be adopted by any state. However, the Act is significant as it furthers the best interest of children born to same-sex parents by seeking to guarantee their right to a relationship with both of their parents. While states like Arizona have reached this conclusion through the judiciary, that process is not short (McLaughlin, for example, started in 2013). The revised UPA provides a way for states to avoid lengthy and complex litigation while protecting a child’s interest in having a legal relationship with both parents.

Joe is a third-year law student at Syracuse University College of Law. He is an Executive Editor on the Syracuse Law Review and a member of the Moot Court Honor Society. Joe is interested in LGBTQ rights, civil rights litigation, and immigration law.