Alejandra was born in Mexico and was brought to the United States at the age of 5. As a high school student, she maintained a high GPA and scored exceptionally high on the SATs. Because she is undocumented, however, she could not access state or federal financial aid to offset the costs of higher education. Because her family could not afford tuition, Alejandra went to school full-time and worked full-time to pay for her studies and provide for her family. She graduated and went on to earn her Master’s degree in applied mathematics. Despite her accomplishments, no current viable path to U.S. citizenship or permanent residency exists for Alejandra and others similarly situated, and deportation to a country in which they have never lived, nor speak the native language in many cases, is always a possibility and cause for daily uncertainty.

The Deferred Action for Childhood Arrivals (DACA) was introduced on June 15, 2012, by the Obama administration under executive order. The program sought to defer immigration enforcement action against childhood arrivals who lived in the U.S. undocumented and met specific eligibility requirements. Contrary to popular belief, DACA did not grant undocumented immigrants a legal status, issue a green card, or provide a path to citizenship. It simply sought to prevent qualifying individuals from being apprehended, placed into removal proceedings, or deported.

Among the requirements to qualify for DACA were proof of arrival to the U.S. before the age of 16 and under the age of 31 before June 15, 2012, current enrollment in school or receipt of a high school diploma or GED, and no convictions for felony or misdemeanor offenses. It is estimated that 1.8 million undocumented youths and young adults were eligible for DACA. The deferrals were granted for two-year periods and could be renewed for additional two-year periods. 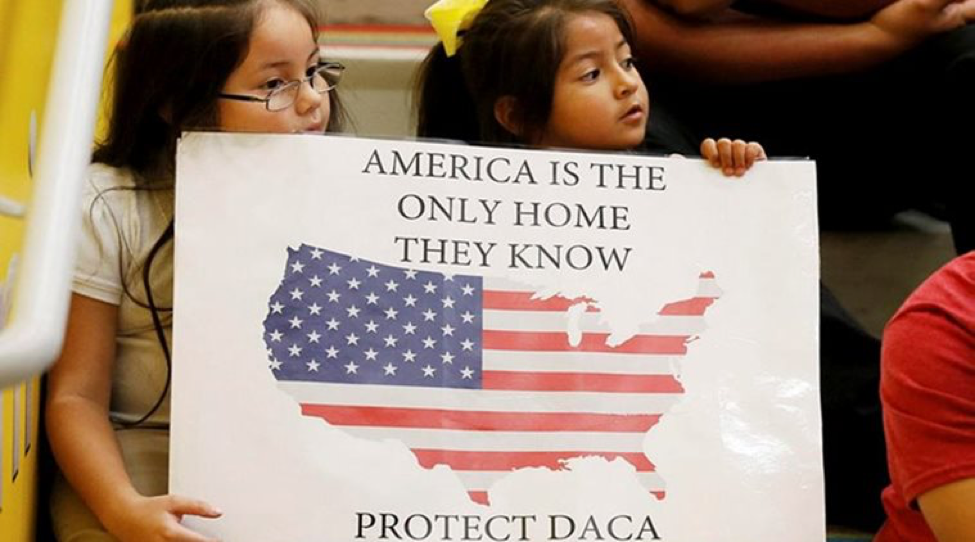 Before DACA, undocumented youths like Alejandra lived in the shadows of society with no identity. Many were born in Mexico and other Central American countries but were brought to the United States as children. Because they are brought at such a young age, many speak only English. They grow up in the US, go to school in the US, work in the US and take part in traditional American activities just like their US born counterparts. The only difference is they do so illegally, with no fault of their own, but because of their parents’ actions when they were kids. Although DACA did not ultimately resolve the problem of undocumented childhood arrivals, it did provide these vulnerable youths with temporary protection until meaningful immigration legislation could be passed.

On September 5, 2017, the Trump administration rescinded DACA, referring to the executive policy as an unconstitutional exercise of presidential authority. President Trump, however, gave Congress six months to create immigration legislation before DACA recipients started losing their protected status. Negotiators have indicated that any immigration bill would need to address four pillars: a plan to protect DACA recipients, funding for the border wall, the end of the diversity visa lottery, and a reduction in family-based migration. At this point, Congress has failed to pass legislation. Republicans cite that Democratic proposals protect too many DACA recipients, and Democrats cite that Republican proposals seek excessive funding for a border wall. The DACA extension officially expires on March 5. If Congress fails to introduce a bill, DACA recipients will return to the uncertain, unpredictable status they held before DACA, where they could arbitrarily be apprehended or deported from the US. For DACA recipients, America is the only home they know.

Last Tuesday, I attended a talk hosted by the University Lecture series featuring Eric Liu.  Liu’s talk, which was titled “The True Meaning of Patriotism,” offered a progressive definition of patriotism and citizenship. He argued that since the 1960s the American Left has largely abandoned the concept of patriotism and allowed the Right seized it as part of its ideological lexicon.  Because the notion of patriotism has largely gone uncontested in the public arena, the idea has become impoverished, reduced to a jingoistic affirmation of American military and economic power.

However, Liu asserted that patriotism is a far richer concept than this.  Instead, patriotism, at bottom, is about putting country above self.  It is about public service and civic engagement—or as he put it “showing up” to one’s public obligations of being politically informed and part of the democratic process.

Underpinning Liu’s definition of patriotism is a commitment to the philosophical tradition of civic republicanism. As we all learn in our high school civics classes, the United States is not a democracy but a republic.  However, Republicanism (the classical political theory as opposed to the current political party) stands in contrast not only to Democracy as a form of government, but also Liberalism (classic philosophical liberalism as opposed to the current political ideology).  Where Liberalism is largely about rights and non-interference, Republicanism is rooted in civic obligations and engagement.  According to Republicanism, self-governance requires moral virtue and public spiritedness. Although Liberal and Republican thought can be seen throughout American history, the latter was more prevalent at the Founding than it is today.

Part of what Liu’s talk was about was reinvigorating our Republican tradition.  At one point during his lecture, Liu argued that the notion of “Rugged Individualism,” a very Liberal concept, was a “myth.”  According to Liu, self-governance cannot work if we think of our Nation merely as a conglomeration of egoistic individuals who use government only as a means of advancing and protecting our own interests. Rather, being part of a Republic requires some sacrifice, putting country above self.  It requires sacrificing some time and mental energy to being an effective citizen—keeping informed about social issues and engaging others about them.

There can be no doubt that our politics suffers when it focuses solely on individual rights to the exclusion of the common good.  However, where I was disappointed with Liu’s lecture is that he did not address what he considered to be the major barriers to civic engagement. Instead, Liu echoed Gandhi asserting essentially that the solution to our civic deficit problem was to “be the change you want to see in the world.”  This strikes me as a good first step but insufficient the face of systemic obstacles.

Hyper-partisanship, gerrymandered congressional districts, a broken campaign finance system, and parallel media universes (on the Left: MSNBC and liberal media outlets, and Fox News and conservative talk radio on the Right) all combine to prevent citizens from being engaged in their government.  As a result, to quote Yeats, “The best lack all conviction, while the worst/Are full of passionate intensity.”  Until we can empower the silent majority of reasonable people to enter the political fray—something that is understandably considered to be unsavory and pointless, we are destined to be politically disillusioned.